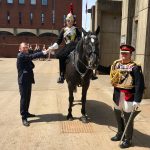 On Saturday the Master presented a sword to Trooper Rook of The Blues and Royals, as his prize from the Company for winning the Princess Elizabeth Cup. The cup is the most fiercely-contested contested competition within our affiliated unit, The Household Cavalry Mounted Regiment. It is awarded by Her Majesty the Queen to the best turned-out Trooper in the Regiment. Every single piece of equipment for both horse and soldier must be cleaned to the highest possible standards, and will have involved hundreds of hours of work.

Historically the Company presented a miniature sword to the winner, but thanks to a very generous legacy from Past Master Emeritus Ian Traill, we have been able to upgrade this to a full-size Trooper’s sword, which is etched with the winner’s name, and is theirs to keep. The presentation took place in front of the entire Regiment after their return to Hyde Park Barracks following the Colonel’s Review of the Queen’s Birthday Parade, the final dress-rehearsal before Saturday’s parade in front of Her Majesty.