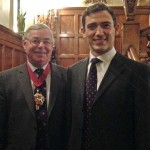 Warm congratulations to Alasdair Abercrombie-Barnett, currently our most recent member, who was admitted as a Freeman of the Company at the Court meeting on the 21st January 2015. Alasdair works for PWC dealing with mergers and acquisitions, particularly in connection with pharmaceutical companies, and has worked previously for G4S and Sussex Police, as well as having served in the Army for some months until injury caused cessation of training. He is certainly in the running for being the tallest member of the Company… We are looking forward to seeing you again at Cutlers’ Hall soon.