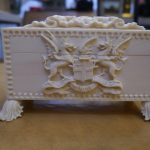 In March 2019 the Beadle was contacted by Sworders Fine Art Auctioneers.  A person had walked into their Stansted auction rooms with a few pieces from his deceased father’s estate, one of which was an intricately carved ivory casket, the emblem on the lid being our coat of arms.

The Chairman of the Collections Committee, Richard Herbert, wasted no time in going to inspect the piece, and it was such an impressive object that he arranged for Sworders to bring it to the next Court meeting. The Court were very enthusiastic about the quality and importance of the piece to the Company, and authorised its purchase. This was negotiated as a private sale by the vendor, thus avoiding the need for it to go to auction.

It was also important to act quite quickly, as the Ivory Act 2018, which is now on the statute book, will, when it comes into force, completely ban the sale or purchase of such items.

As well as our coat of arms, the front of the casket bears the arms of the City, the back two roundels depicting cutlery items. One side has the initials of Henry Howard Molyneux Herbert, 4th Earl of Carnarvon below an earl’s coronet, and the other side bears the Herbert family crest of a wyvern holding a glove in its mouth and the motto ‘Ung Je Serviray’ above the date of 22 May 1879. 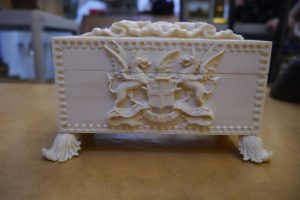 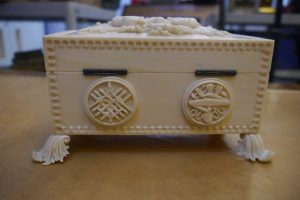 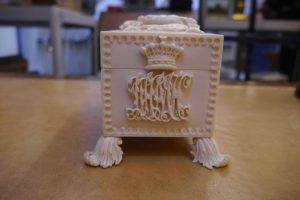 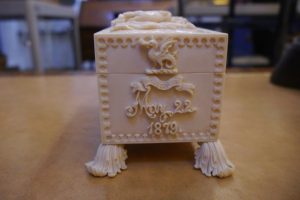 The casket is finely carved from a single piece of elephant tusk, and was made by William Lund & Son of Cornhill and Fleet Street, described in the 1884 Business Directory of London as ‘cutlers, desk, dressing case and pocket book manufacturers, and ivory turners’.

Examples of the boxes that Lund’s made can be seen at Antique Box.

So why was the box made? Lord Carnarvon opened our ‘First Exhibition of Cutlery’ at our Hall in Cloak Lane on 1 May 1879, and we presume that it was presented to him after the exhibition, perhaps at a dinner on the 22 May 1879. 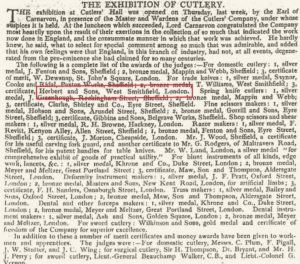 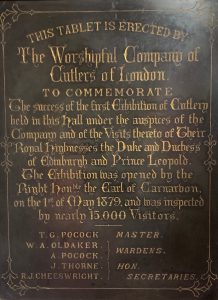 Outside the Clerk’s office in our current Hall we have a slate plaque commemorating the exhibition. The Master at the time was Thomas Gotch Pocock, great great grandfather of Past Master Michael Pocock, and the Senior Warden was William Adam Oldaker, great great grandfather of Past Master George Clarke.  William Adam Oldaker was also father-in-law of William Alfred Herbert (Master in 1912), whose business, Herbert & Sons of 6&7 West Smithfield, were awarded a certificate for a butcher’s knife displayed at the exhibition. William Lund won a silver medal for a ‘comprehensive exhibit of goods of practical utility’, but this could hardly have been for such an exquisitely carved ivory casket!

The Company is currently considering how best to display this fine, but fragile, piece.