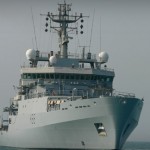 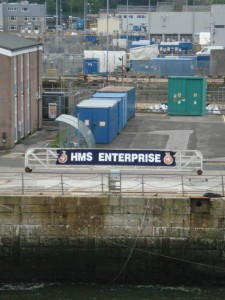 All at Cutlers are very proud of our links with HM Armed Forces. Our particular link with the Royal Navy is with HMS Enterprise, which is not part of Starfleet Command but a naval survey ship. We had enjoyed this link since she was commissioned in 2003.

In the last year, we have given a grant towards the refitting of the lower ratings’ Mess,(using a bequest given by the late Past Master Patrick Burke). For a number of years, we have also given an annual Cutlers’ Prize to the member of the ship’s company whom the Commander Officer considers has contributed most to the well running of the ship during that year. This year the Cutlers’ Prize has been awarded to LCIS Richardson. [For those like me who are ignorant about all things military, LCIS stand for a Leading Hand who is a Communications and Information Specialist; more information about Naval ranks may be found here]. The citation for this year’s Cutler’s Prize prepared by the Captain of HMS Enterprise, shows a remarkable commitment to duty.

“LCIS Richardson joined HMS Enterprise in January 2013. He is part of the Communications and Information Systems Sub-department which has recently been subsumed by the Weapons Engineering Department and transferred from the Warfare Department. His role includes establishing secure and non-secure external communications from and to HMS Enterprise. Additionally, due to the advances in technology in recent years, this role has evolved significantly from the ‘Radio Operator’ of old to a more systems manager with communicator sub-skills. 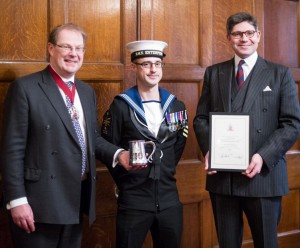 “In August 2013, HMS Enterprise was upgraded with the latest IT Infrastructure, replacing a system designed in the 1990s. In brief, this is a commercial ‘off the shelf’ Local Area Network of computers around the ship for administrative tasks and records management, similar to almost every modern office in any commercial company adapted for afloat military use. It allows greater levels of electronic ways of working in a shared environment. Although not technically trained, LCIS Richardson underwent comprehensive training prior to the installation of the system in the ship, often having to forego leave periods due to the timing of the courses. His role is primarily system housekeeping and maintenance of individual log-ins and security permissions. However, due to the loss of the technical support personnel elsewhere in the department, he has had to ‘step up to the plate’ and deliver more than his Terms of Reference to ensure the compliant and functional running of the system. Due to the more complex nature of this system in relation to its predecessor, it is manpower intensive and involves significant interaction by the maintainers.

“As mentioned, gapping onboard since installation, and the first-year teething issues of its operation, has loaded LCIS Richardson’s daily task to the point that, to install patches and hotfixes in a timely manner, he has frequently volunteered to do this overnight so as to afford the least impact on the ship’s company. Thankfully the teething problems are being overcome but the additional workload will persist for quite some time yet and through LCIS Richardson’s effort HMS Enterprise is one of the better ships in the Fleet for managing patch installation.

“Mid year, when HMS Enterprise was three months into her latest 22 month operational deployment, and just prior to the evacuation of British Nationals from Tripoli, LCIS Richardson demonstrated his dedication and commitment to the ship when his opposite number injured himself to the point of being unable to remain onboard. Without hesitation, and despite being on paternity and watch rotation leave, LCIS Richardson returned to the ship in order to ensure minimal impact was felt onboard as the ship was at a critical point of the deployment. 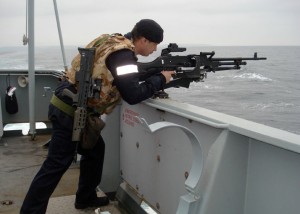 “Although not alone in this selfless commitment to HMS Enterprise, his approach to his job (coupled with his additional parental duties with the recent addition to the Richardson household), the intensity of the FOST Basic Operational Sea Training (a tough five period week training period for the whole ship) prior to deployment, he has maintained in his own unique style, a high level of service delivering output on all fronts.

“The nomination for the award for this year has been hotly debated, as there are other strong contenders but it is the continued effort that has taken place behind the scenes over the past 20 months that it is felt should be recognised with this award”.

LCIS Richardson came to Cutlers’ Hall in early February 2015 to receive his well deserved prize, and to have have lunch with Past Master Adam Traill and our Clerk, Rupert Meacher. 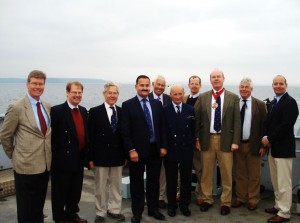 In May 2014, several members of the Cutlers were greatly privileged to spend a day on HMS Enterprise just before she left Plymouth for an 18 month tour of duty. We were given an inkling of the many challenges that modern sailors face and we were all highly impressed by the professionalism and dedication of the entire crew to the ship and the task in hand. We look forward eagerly to learning more about her activities in the months ahead.