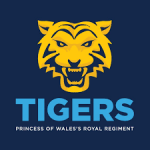 On Sunday a team from the Company were able to join 4th Battalion, Princess of Wales’s Royal Regiment at one of the Battalion’s training weekends at Longmoor, and gain first hand experience of some of their weapons systems, as well as seeing soldiers going though the bayonet course, which looked to be considerably muddy and exhausting – the Clerk declined the kind offer of the Regimental Sergeant Major to try it for himself…….

The Princess of Wales’s Royal Regiment (PWRR), nick-named The Tigers, are the Senior English Regiment of the line and renowned for being a fighting Regiment delivering excellence on complex, tough operations. An affiliation between the Company and the 4th Battalion, one of the Regiments 2 Army Reserve Battalions can be traced, through B Company, back to 1973.

The Company provides invaluable support to the Battalion, especially in the formation of the Officer’s, Sergeant’s and Corporal’s Messes, the beating heart of any Unit, and the Cutlers’ Sword is awarded annually to the Junior Officer judged by the Commanding Officer to have contributed the most to the Battalion throughout the year. 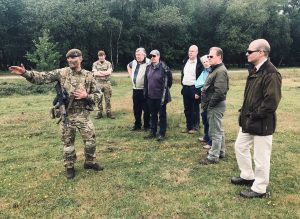 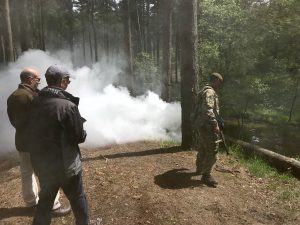