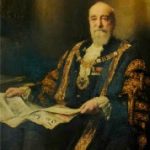 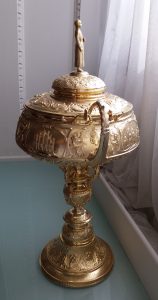 who has taken the main staircase at the Mansion House will have noticed that the space is also used to display significant pieces from the House’s collection of art and treasures.

On show this summer is the extraordinarily beautiful Christ’s Hospital Cup. It was presented by the Hospital in 1906 to the then Lord Mayor and later Master Cutler, Alderman Sir Walter Vaughan Morgan Bt (1831-1916). He himself was taken into Christ’s from the age of 9 and in adult life he was noted for his generosity to charities. He gave particularly long and valuable service to Christ’s Hospital where he held the position of Treasurer. The cup is fine tribute to his association with the school. 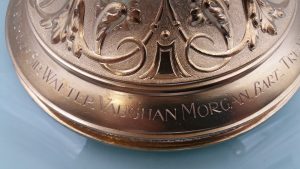