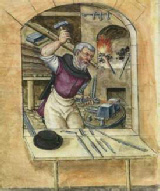 Cutlers are known to have been practising their craft in London from at least the 2nd or 3rd century AD. Indeed, the word ‘cutler’ is derived from the Latin ‘cutellarius’ through the Old French ‘coutelier’ and signifies a maker or seller of knives and weapons with a cutting edge.

Although cutlers traded in all manner of cutting instruments, it was their skill at producing fighting weapons that brought them wealth and prosperity. From earliest times until the end of the 16th century, with wars in France and internal civil wars, the demand for edged weapons was both constant and profitable. Only later did the emphasis shift from implements of war to cutlery and other domestic wares such as razors and scissors.

It is known that a Gild of Cutlers existed in the City of London in the 13th century, comprised of cutlers who had settled in the vicinity of Cheapside. As was the case with the other trade guilds of the day, its function was to protect the interests of its members, to attend to their welfare, and to ensure that high standards of quality were maintained. The first Ordinances were granted in 1344 by the Mayor and Aldermen, which gave the Gild power of search and assay of all manner of cutlery.

The cutler was not simply an artisan but a designer and assembler of parts who produced the finished article, which he then sold in the market place. The blades were made by the bladesmiths, and the scabbards or sheaths by the sheathers, whilst the skills of other trades such as the gilders and furbishers and grinders would be used to produce the finished article. Eventually, all these subsidiary crafts were absorbed into the Cutlers Company, and by the 16th century the Company controlled the entire trade. 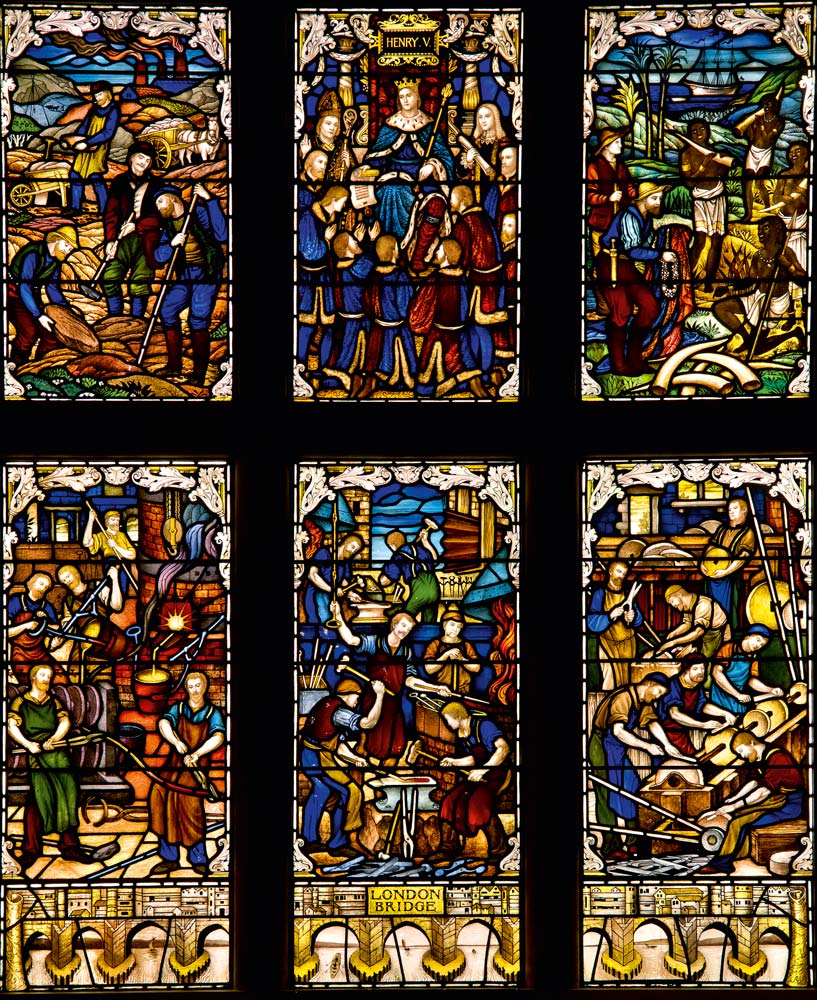 By the early 15th century the Mystery of Cutlers, as they were then called, felt that their position was of sufficient importance to petition the King for a Charter. They were successful in their plea, for on 4th December 1416, the year following the battle of Agincourt, Henry V granted to the Company its first Royal Charter. This can be no coincidence, for the King had assembled his army in haste, and this was the only Livery Company to which he granted a Charter. One can speculate that the grant may have been made in part payment for arms supplied.

The importance of this Charter cannot be overstressed as it granted considerable powers to the Company, all guaranteed by the King’s authority. It created the offices of a Master and two Wardens to govern the Company, assisted by a Court of Assistants. These offices have con­tinued through nearly 600 years down to the present day. The Charter also gave to the Company the right to own property, whereas previously all its property had to be held by trustees; and confirmed the right of the Company to oversee the Cutlery trade in and around London, a right which they had already held for many years from the Lord Mayor and aldermen.

The Company continued to prosper, and in 1515 it was ordained that they should be placed 18th in the order of precedence of the City Companies, where they remain to this day. Over the years various monarchs have cancelled and reissued the Charter; the one under which the Company operates today was granted by James I in 1606.

By the middle of the 18th century much of the cutlery trade had moved to Sheffield, where raw materials and water power favoured the production and working of steel. However, as late as 1879, there were still some thirty Cutlers actively working in the City of London, and the Company held an Exhibition in its Hall, awarding medals for various classes of work. Amongst the exhibitors and prizewinners were Wilkinson, the renowned makers of swords and razor blades. Their Acton sword factory closed, and sword production ceased in September 2005. 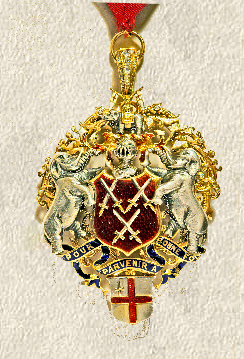 The Masters Badge
Arms were first granted to the Company on 17th May 1476, but the elephant and castle crest was not granted until 1622. The original blazon reads:

Gules, three pairs of swords in saltire argent, hilts and pommels or Crest: An elephant’s head couped gules, armed or.

The elephant is presumed to allude to the ivory employed in the work of hafting swords, knives and other weapons, a costly material only fit for the best of implements.

The motto was originally ‘Pervenir a bonne foy’, which later became

To succeed through good faith.

The ceremony of the Loving Cup dates back to Anglo-Saxon times and the assassination of King Edward the Martyr who was stabbed by command of Elfrida whilst drinking from a two-handed goblet. As a precaution against such acts of treachery the back of the person drinking from the Cup is guarded by his neighbour.

The Company’s oldest Loving Cup was donated in 1616 by Gilbert Clark, tenant of The Catherine Wheel, the Company’s former estate at Egham.

The Loving Cups are still in use and form part of all major dinners.

The use of the Rose Water Bowl is alleged to date from the days before cutlery was in use, apart from the personal knife that each person brought to the table and placed beside the trencher or thick piece of bread used to mop up liquids – a potentially messy business. However, the custom is continued because it is subtler than that – by dipping the corner of your table napkin into the rose water and patting behind your ears you stimulate the nerves in this region, which through their connections soothe the digestive organs. The source of this knowledge is the Society of Apothecaries, than whom none could be more authoritative in such matters.

A pair of rose water bowls in use today were presented to the Company by Alderman Henry Winchester, Master in 1829, on becoming Lord Mayor of London in 1834.

The Rose Water Bowls are still in use and form part of all major dinners.