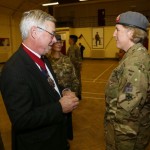 Stand to attention! The Master, together with PM Adam Traill, paid a visit to C Detachment, 256 Field Hospital, which is based in Kingston, on the 16th September 2014. Also inspecting the unit was the Mayor of Kingston, Councillor Ken Smith, who had served many years in the Airborne Regiment. The Cutlers have had an association with C Detachment of 256 Field Hospital for 19 years; and other Livery Companies also have such links – the Apothecaries are linked to A Detachment and the Barbers are linked with B Detachment. 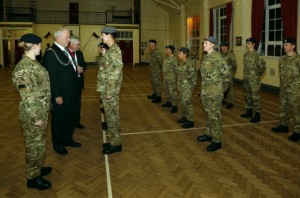 256 Field Hospital is based in London but recruits from most of the south east of England. A, B and C detachments train on Tuesday evenings, D Detachment (based in Brighton) train on Wednesday and approximately two weekends per month. 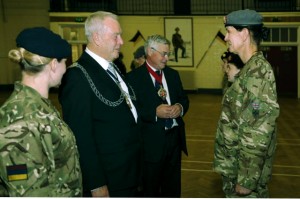 Training could be anything from management of patients in an operational setting or military map-reading. The Detachments offer high quality of training and operational experience to the motivated and enthusiastic volunteer. More information about 256 Field Hospital can be found at www.army.mod.uk/medical-services/29935.aspx. 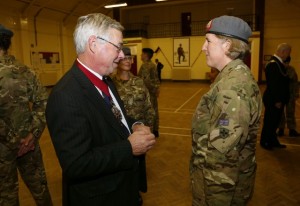 During the evening, the Master presented the Cutlers’ Sword to Captain David Thomas. Part of the citation read “What our reservists do for our country is exceptional, the circumstances under which they do it, often unbelievable and the difficulties whilst they are deployed overseas for their family, are immense. It takes remarkable people to do what they do…and they are remarkable people.

“It is a great privilege for me to be able to honour Dave Thomas with the Cutlers’ award for 2013. His long service and dedication not only to C Detachment, but to the army as a whole, has been remarked upon. He has been instrumental in bringing our affiliation closer during his time with the detachment, and he is a worthy nominee for the award. He richly deserves the plaudits he has received in his citation. It gives me great pleasure to present him with the Cutlers’ Sword for 2013”. 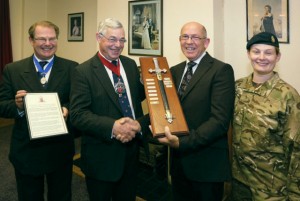 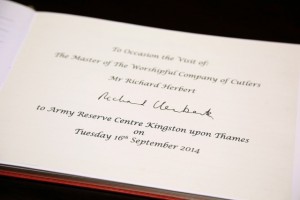