Polly Bryans sent us this report about her work in Hong Kong at the end of January 2015 .

“It has been just over four months since I left England to travel to Hong Kong. My time here is going extremely quickly – I am really loving it! I have learnt an enormous amount that will stay with me forever.

“I am living in Sha Tin, which is just outside Hong Kong in the New Territories in a place called Shing Mun, which is owned by the St Stephen’s Society. Its purpose is to accommodate ex drug addicts, young offenders, those who have been abused/trafficked etc., and rehabilitate them. To do this, we live with them and do life with them, be this cleaning, teaching them English, playing sport, or teaching them to cook. It is through the love that they are shown and receive that they grow and heal. There are five blocks that the ‘brothers’ live in and I live with 30 Chinese men, ranging from 19 years old to 67 years old. The ex heroin addicts are called ‘ brothers’. 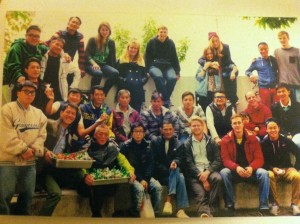 “What are the things I have learnt? Well for one, I have been learning Cantonese – which has been one of the biggest challenges so far! The language is so different to English – absolutely no similarities between them. Although the language has been one of my biggest struggles, it has been one of the most rewarding aspects. I have learnt that it is through the bigger challenges that you learn and grow the most. When I first arrived, it was so difficult to communicate or start to build relationships with all these men because we shared hardly anything in common; and the language barrier made it almost impossible a lot of the time! But now that my Cantonese is improving, I am able to speak to them and learn more about them; and I have discovered how special each one of them is. Cantonese is pretty much opposite to English, which makes it very challenging to learn! For one, they use symbols, so it’s impossible to try and start reading it! But I have learnt how to write my name in characters, which I am very proud of! Unlike European languages, there are no words that originate from Latin or Greek, so there are none that sound similar to English; and so I’ve found that it’s a completely new way of learning. As I began to learn how they speak and the sounds they make, it became more familiar – I was able to improve a lot quicker and it became easier to pick up. I love learning Cantonese because it is such a foreign language to me, which makes it new and exciting; and it is a very expressive language, which I really enjoy. I like to listen to the Chinese conversations even when I don’t understand them, as you hear so much emotion and expression. The brothers can be very loud at times!!

“The culture, too, is completely different to the Western culture that I am used to – it is fascinating. Many times I have experienced a feeling of being quite alienated here, as the contrast is so stark compared to what I’m used to in England. One thing that overwhelms me most is the fast pace life of Hong Kong. It really never stops here and everyone moves around so purposefully and quickly the whole time. It can be so easy to get caught up in this way of life and feel the need to always be doing something or going somewhere – but I have learnt that it is important to just enjoy where you are and take moments to rest and absorb your surroundings. Sha Tin is a quick bus ride from the nearest metro station. The buses are so quirky and tiny – nothing like English buses. They seat approximately 20 people, and have pretty crocheted backs!! If you miss one bus because its full – another comes along very quickly. St Stephens Society is up a steep hill – it so lovely to come back here if we have to go on outreach for the day – as it has the most amazing view over Sha Tin – and is so peaceful after the hustle and bustle of life in the city. 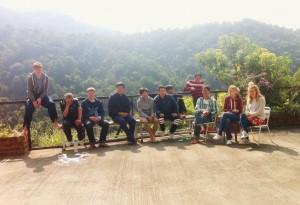 “While it can be so busy here, there are also times of beauty and tranquility. One of my favourite places in Hong Kong is called Sai Kung. It is a small village by the sea which has the most beautiful hiking trails surrounded by lovely green forests which lead to the most incredible beaches and waterfalls that are so often deserted! I have spent much of my days off here enjoying the peacefulness of it and exploring the very small fishing villages. They have so much character with so many interesting people!

“One thing that I found strange at the beginning – which I have now become used to – are the meal times! When I am in the block with the brothers, we all eat together. We begin with rice for breakfast, have it for lunch and again for supper – we have it three times a day! They add strange things like chicken feet – which were difficult to become accustomed to, but it has now become part of my normal eating habits! To begin with, I did find the Chinese etiquette of eating very strange. During the meal one eats the bony meat, chewing it around – then spitting the bones out on the table! Everyone eats very, very quickly – not having a moment to talk! Coming from a very English background of roast dinners, using napkins at meals, and a knife and fork – I found it so off-putting and really quite vulgar! Now though, I am starting to really enjoy it and really get stuck in. It is really a pretty liberating experience! I wonder what my family will think when I get home? [I think the Beadle would have views were such habits to be brought in Cutlers’ Hall…].

“I am learning to play the guitar; during the day, there are times when we sit around with the brothers and try learning the guitar, or playing Uno, or similar games. We don’t play anything that might become addictive as we are trying to stop them from their addictive habits. During the afternoons they all play sport – so my badminton is really improving; as you can imagine, the Chinese are pretty adept at that game! I have also been learning gate ball, which is the Chinese version of croquet and is so much fun!

“We have taken the brothers hiking, which is an extremely entertaining experience. Many of them are so unfit and it is a struggle for them to reach the top of the mountain; it takes much encouragement to get them up it. Yet others want to prove themselves and race up it in a battle of the egos. We always take a packed lunch of spam and egg sandwiches (not the most enjoyable, but they give you energy) with a few peanut butter sandwiches, which go down a treat. There are always beautiful views over Hong Kong from the tops of the mountains, with lovely open spaces and space to think, rather than be caught up in the hubbub of the city. 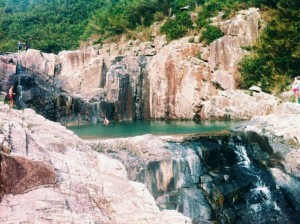 “Sometimes I teach the brothers to bake – but it can be slightly tricky at times, as they don’t have the same ingredients as we have in the UK. We had a bit of mishap the other day making brownies – the butter had melted in the saucepan – and unfortunately one of the brothers went a little bit close to the pan, knocked it onto the floor – spilling it onto one of the other brother’s arms who got burnt in the process… luckily all was OK. There are a lot of different characters and ages amongst the brothers, so there is endless entertainment in the house!

“Once a week, I travel an hour away by two bus journeys to go over to the girls’ house. This is where the Chinese women and teenage girls live who are coming off heroin. It is different over there as it is a much smaller place. We sew with them, teach them English, clean and play games and then two of us ‘gappies’ stay up all night with the one that is coming off heroin. Each time they go through withdrawal symptoms, we pray for them and they stop having any symptoms of cold turkey, which is such a miracle: amazing to witness.

“It’s tough living as a girl amongst so many Chinese men – most of who have been on drugs for most of their life and in triads. To begin with, I thought we would find no common ground; nothing to bond over or share a love of. But over these past few months, I have learnt that that we are not quite as different as we seem. I may not have grown up in a triad or taken drugs- but just as most of them do, I come from a broken family and my father is not really in my life. This means we share the same hurts and struggles and we are able to be a support to each other and build each other up. Love, I have learnt, is not conditional on what the other person in a relationship does – it is not about ‘I have done this for you so you should do this for me’; but it is about being selfless and giving what you have even when you receive nothing in return. I have received so much love out here from the brothers and other helpers- unconditional love from real friendships. I have learnt that we must really love one another and serve one another.

Below is a typical week for me for you to get an idea.

Monday morning: I help in a children’s group
Monday afternoon: I travel an hour away to the girl’s house where I stay the night.
Tuesday evening: stay up all night praying with the ex heroin addict.
Tuesday lunch: leave the girls’ house and go to church to teach English.
Wednesday: my day off.
Thursday morning: In the block with the Brothers.
Thursday afternoon: 2.30 – 6.30 pm Go off and teach in the school on site.
Friday morning: In the block with the brothers
Friday afternoon/eve: Go on outreach to minister to heroin addicts
Saturday: Outreach all day
Sunday: Church in am.
Sunday pm: Gappies’ meeting.
Sun pm: In block with Brothers.

“Thank you again so much for your generosity in helping me fund my gap year here. I am so enormously grateful to you! In a month I will be travelling to Cebu for two weeks to go on outreach and visit the St. Stephen’s base over there. I am so excited about this trip as I will be able to experience another culture and meet so many new people!”

Well done Polly! It sounds exhausting but very worthwhile; and we look forward to hearing more on your return.

This year there are seven Boot scholars studying divers languages overseas. There is more about the Boot scholarships here.